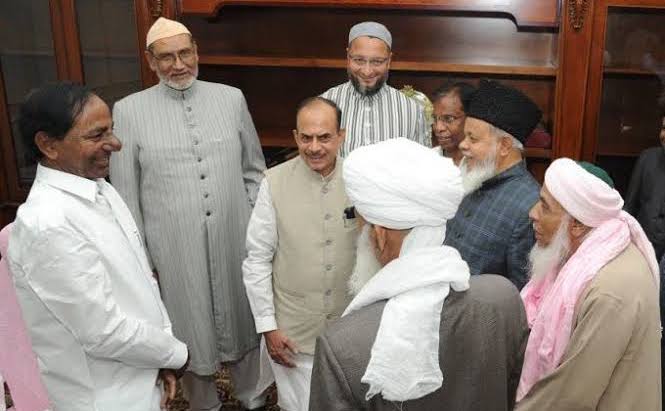 With just a few months left for the elections to the Greater Hyderabad Municipal Corporation (GHMC), Telangana Chief Minister K. Chandrasekhar Rao (KCR) sought to butter both sides of the bread – Hindu and Muslim, as he assured the reconstruction of the two demolished mosques and a temple at the State Secretariat. He also agreed to construct a Church for the Christians and also a Gurudwara for the Sikhs to protect the ‘Ganga-Jamuni Tahzeeb!’ of the young Telangana State.

It may be recalled that nearly two months ago, two mosques and a temple were demolished at the old state secretariat in Hyderabad. Telangana Chief Minister K Chandrasekhar Rao on Saturday announced that the government will rebuild them along with a church in the new secretariat complex. Discussions are underway for the construction of a Gurudwara also. He made the grand announcement when a delegation of Muslim leaders led by Hyderabad Member of Parliament Naqeeb Al Millat Barrister Asaduddin Owaisi called on him to demand reconstruction of the demolished places of worship.

Earlier, Christian community leaders had also demanded the construction of a church, saying church services were used to be held in the old Secretariat. KCR assured the delegation that he will lay the foundation stone in the first or second week of October this year — for all the three places of worship on the same day and will ensure their speedy completion.

KCR, as the Chief Minister is popularly known, said the government will bear the cost of construction of all the four places of worship. The Chief Minister disclosed that each mosque will be constructed over an area of 750 square yards. Thus, the two mosques will be built over 1,500 square yards. He assured the delegation that the mosques would be reconstructed at the same sites where they stood earlier and after the construction, they will be handed over to the Wakf Board. The land between the two mosques will be utilised for the construction of staff quarters for the Imam and others.

KCR simultaneously announced that the temple will be built on 1,500 square yards and after reconstruction, the same will be handed over to the Endowments Department. Chief Minister KCR said since Christians also demanded the construction of a Church in the Secretariat, the government has decided to build the same. Stating that Telangana is a symbol of ‘Ganga Jamuni Tehzeeb’, the Chief Minister said the government respects all religions equally. Hence, it has decided to build places of worship of all faiths in the Secretariat.

The Muslim leaders, in their representation, demanded reconstruction of the mosques at the same place where they existed prior to July 7. They cited the Places of Worship (Special Provisions) Act, 1991 under which the religious character of a place of worship existing on August 15, 1947, shall continue to be the same as it existed on that day. The representation also referred to the Waqf Act, 1995, under which the nature of a Waqf property cannot be changed.

Later, addressing a news conference, the Muslim leaders thanked the Chief Minister for his announcement to reconstruct the two demolished mosques at their original sites. Barrister Asaduddin Owaisi said the Chief Minister also announced that 1,500 square yards of land between the two mosques will also be given to the mosques. The MP said KCR agreed to allot land in the Outer Ring Road area of Hyderabad for graveyards for the Sunnis, Shias, and the Mehdavis.

It was brought to the notice of the Chief Minister that due status and importance was not given to Urdu – the second official language of the Telangana State. KCR decided that a scholar of the Urdu language will be appointed to the post of vice-chairperson in the Official Languages Commission, who will be entrusted with protection and promotion of the Urdu language in Telangana State. KCR promised to release Rs 18 crore for the pending works of the completion of the orphanage Anees ul Ghurbaa at Nampally in Hyderabad. He also assured that the construction of the long-pending Islamic Cultural Centre will be taken up soon.

It may be recalled that BeyondHeadlines had reported on 19th August 2020 about the 2-week ultimatum given by the Muslim religious leaders to the KCR Government for the reconstruction of the two demolished mosques at the same original sites.

KCR Government has kept to the 2-week deadline! With the Bharatiya Janata Party (BJP) and the Congress breathing down the neck of the Telangana Rashtra Samithi Government, KCR after this wise decision to reconstruct the places of worship for four major religions seems to be sitting pretty now as far as the elections to the GHMC are concerned. A good beginning is half done!