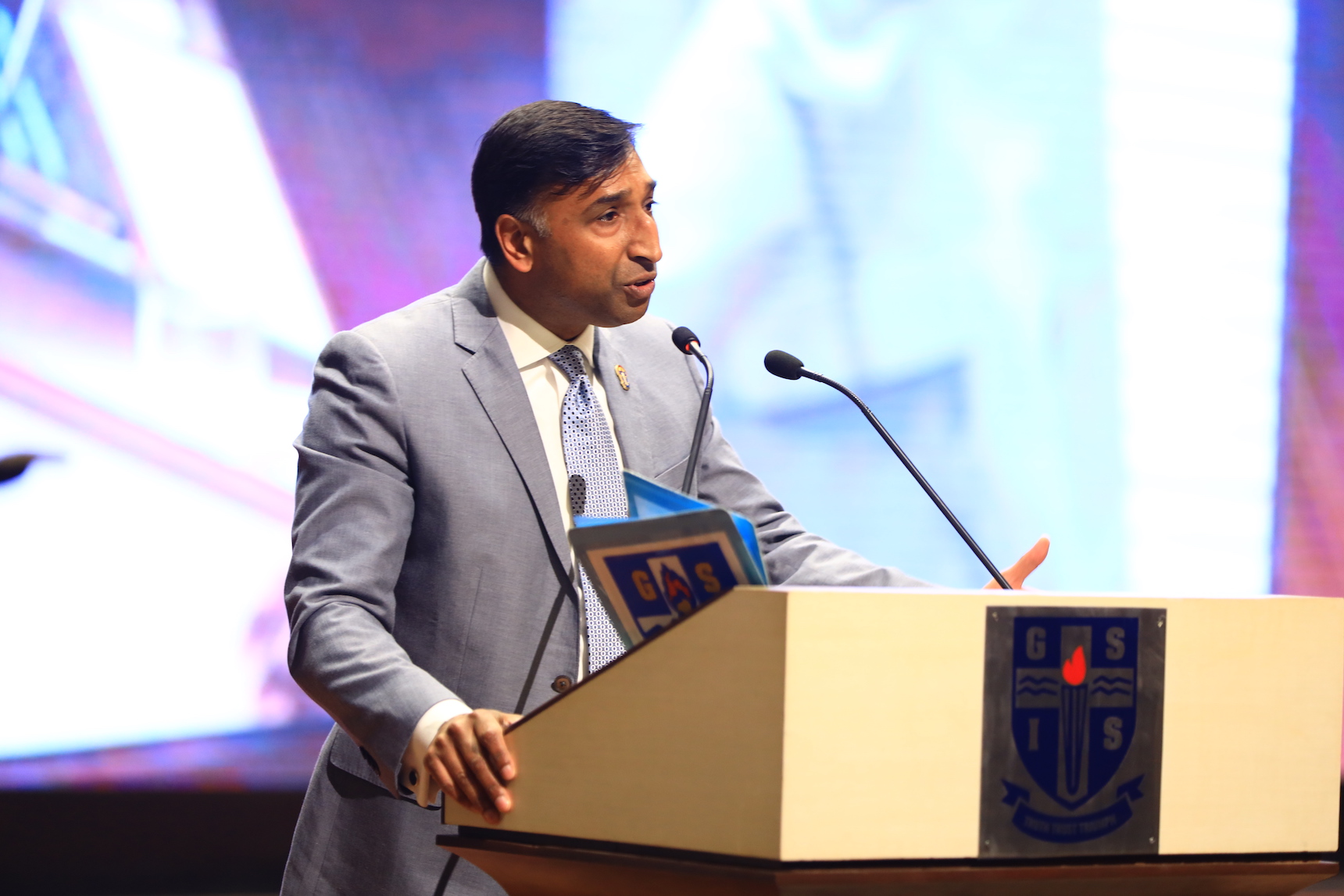 Jacob Thomas has a mountainous job to do in the stunningly alluring hills of Ooty. As the president of the Good Shepherd International School (GSIS), he has inherited a precious legacy from his late father and founder of GSIS Dr. P C Thomas. In his debut year address, Jacob Thomas inspired the 71 (seventy-one) new graduates of Class XII at the GSIS to challenge the status quo, evolve, innovate and make decisions with convictions. He captivated the audience with his wit and sparkling intelligence and earned many rounds of thunderous applause.

At the newly-inaugurated auditorium named after his illustrious father, Jacob Thomas asked the new graduates not to compromise with convictions and reminded that the 1964 Oscar Award winner Sidney Poitier did not make a compromise with himself even though he lost an acting role that was paying $ 750 per week in the 1940s – a lot of money. Later, he had to work in a restaurant but he did not play the role of an impoverished African slave. Poitier found that the passive character he was asked to play went against what he valued in his life.

The deep thinker that Jacob Thomas is, he quoted the German Philosopher Friedrich Nietzsche: ‘He whose life has a why can bear almost any how.’ Jacob Thomas urged the students to plant the seed of convictions that will give them the resolve to face those tough decisions without compromising values. The strongest oak that can weather any storm, can only do so when its roots are strong.

Before the hymns and the songs, S Narayan, IAS (Retd.), former Finance Secretary, Government of India, inaugurated the swanky state-of-the-art Dr. P C Thomas Auditorium and paid lofty tributes to the GSIS Founder for his vision. Hearing this put a smile on the face of Mrs. Elsamma Thomas, the co-founder of GSIS and the better half of Dr. P C Thomas. Narayan opined that Dr. Thomas was one of those persons who was able to articulate all his visions into reality. Addressing the new graduates, Narayan observed that the new graduates are going from an ordered environment, a disciplined environment into a world which is actually full of chaos and disturbance.

Sheila Alexander, Principal, GSIS, who distributed the Graduation scrolls to the Class XII new graduates extolled: ‘‘We have empowered you to seek your passion and purpose. GSIS has instilled in you a sense of global responsibility. It has allowed you to succeed and to fail, to deal with the challenges of a global pandemic, remote learning, virtual events, and then bouncing back to normalcy. These are only a testament to the fact that despite any adversity, you have risen to the occasion with purpose and intention.’’

Every time you remember the legacy and lessons learnt in GSIS commit to carry the motto of the school ‘Truth, Trust & Triumph” with you as you take the next step in your journey.

The twice-victor against Covid-19, Sheila Alexander is known for affection towards students but she is also seen as a tough task master and a disciplinarian. She toiled with Dr. P C Thomas to take GSIS to amazing heights during the past three decades. She has an able teacher team led by Suresh Thangarajan, the higher secondary school coordinator. Her notable achievement apart from the academic excellence of students is that GSIS has been drug-free all along. She provided a clean environment laced with values to give peace of mind to parents, who stay thousands of miles away from students. The in-house Counsellors Anila Mathew and Mary Shiju continue to guide and counsel the students for further education abroad and in India giving them options to make informed choices about the future.

Mrs. Shanthi Narayan distributed awards and certificates to students who excelled in academics and co-curricular activities. She was welcomed by Shourya M, who presented the bouquet to Mrs. Shanthi Narayan.  He is 7 years old and is from Kakinada, Andhra Pradesh.  He is the youngest child amongst the Primary School students. This goes on to show the trust GSIS enjoys with the parents. The gentle Headmistress Deepa Suresh puts the little ones on her lap and does not make them miss their parents. The parents rest assured that even the tiny tots are looked after well and raised in the right academic settings.

This report would be incomplete without the mention of Sara Jacob, senior vice president, GSIS. Sara induced a sense of academic seriousness among the students who came back to offline learning almost after two years. She clamped down on the social media time of the students. ‘It made me unpopular with the students,’ she chuckled. But, I would say that it made her popular with the parents. Sara had spoken about the importance of privilege and gratitude. An interesting video about understanding privilege was shown to the huge gathering of students, teachers, and parents. The video generated huge applause. The sense of the video was to be grateful that you have not been discriminated against based on race or social status. Privilege should create a sense of appreciation, gratitude, and self-awareness about the opportunities afforded, while there are millions of others in this world, who are not fortunate as the privileged ones.

The graduation is done and dusted. The new graduates’ mettle will be tested in the upcoming final examinations. Let them put their best foot forward. All the best to them!