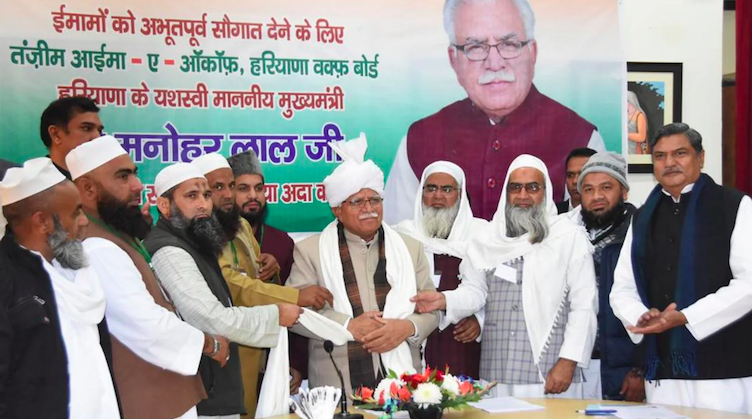 Haryana CM Manohar Lal Khattar offered a 50 percent raise in the honorarium of Imams and Maulanas in the state. He also promised them a 5 percent increment every year. In the wake of this decision, the Haryana Waqf Board organised a felicitation ceremony at Gurugram University on Thursday, where it felicitated the Haryana CM for hiking the honorarium. This was the first of its kind meeting with the Muslim clerics.

Haryana has often been in the news for the wrong reasons due to the strident and belligerent Hindutva. Haryana CM Khattar has also pampered the Sangh Parivar by stopping the Friday prayers permission to Muslims in open areas. Now, to reduce the resentment among Muslims, Haryana CM Khatta(r) decided to make the Imams’ mouths ‘Meetha’ with a substantial honorarium hike. Perhaps, the success of the Bharat Jodo Yatra in the Mewat region of Haryana is giving jitters to the BJP. It is to counter the Rahul effect that Khattar has thought about a section of Muslims so kindly. It seems Khattar is on an Imam Jodo Yatra!

The Tanzeem Aima-e-Auqaf, an organisation of the Imams, said the salary hike was unprecedented and claimed that at least 800 Imams working with various mosques in Haryana will benefit from this decision. Imams are paid salaries by the Haryana Waqf Board, which gets grants from the state government and also generates income from some of its own properties. Zakir Hussain, the administrator of the Haryana Waqf Board, said that Imams will be paid between Rs. 14,000 and Rs. 16,000 as honorarium per month. “The provision of a 5% yearly hike in imams’ honorarium has never happened anywhere in India,” he boasted.

Speaking during the felicitation, CM Khattar said, “Every possible effort is being made to increase brotherhood in Haryana. Considering the demands of Imam organisations, we have increased the honorarium of Maulanas and Imams. The demands were not taken into consideration for the past several years.”

Later, addressing the media after the felicitation programme, Chief Minister Khattar observed that the “Imams can play a crucial road in improving education and health facilities in areas such as Mewat. We are also working on creating more infrastructure and development in this region. The imams have also played an important role in the success of the Beti Bachao Beti Padhao campaign in Mewat as well as the Swachh Bharat campaign,” he acknowledged.

Khattar disclosed that the state government is striving to ensure that temple priests in Haryana are also paid a minimum wage by the organisations that employ them. “A board has been formed by the government to oversee this aspect and also for the welfare of this section,” he added.

It is an open secret that the largely perceived poverty-stricken community does not take care of the Imams, Muezzins, and Islamic teachers and scholars. Even if one Muslim household contributes one rupee per week for payment of their salaries, the Imams and Muezzins will not live their lives in abject poverty. A large portion of the state’s income is derived from the excise department through the sale of liquor and taxes on liquor, wine, brandy, etc. The grant from the state comes from the income thus earned.

It is high time, the Muslim community stops relying on state grants and looks after the mosques and the Imams and Muezzins from their pockets if they are striving for earning through just means and piety! Imams should lead the prayers only when they eat with Halal resources!