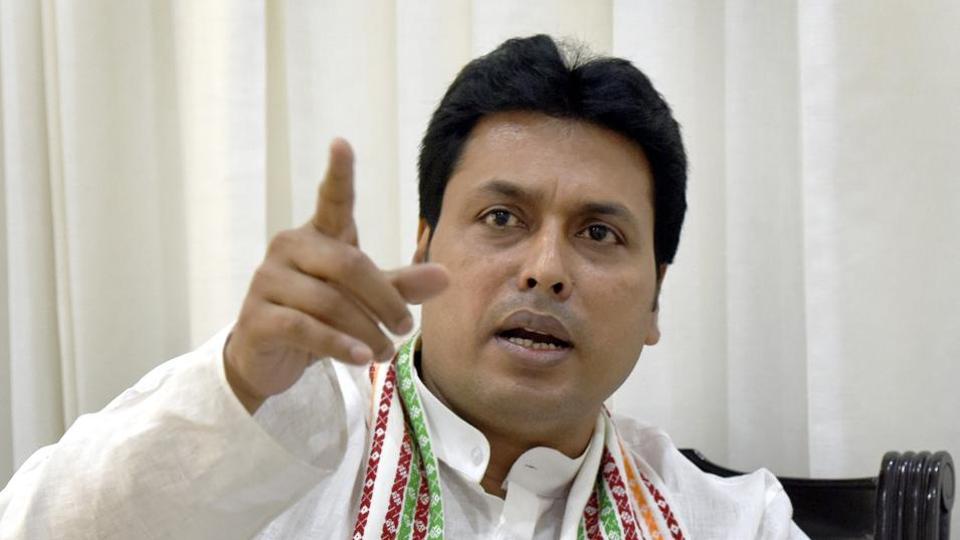 Tripura Chief Minister Biplab Deb has courted controversy and put his foot in the mouth again by saying Punjabis and Jats are physically strong but less brainy while Bengalis are known as very intelligent. Every community in India is known with a certain type and character, the Bharatiya Janata Party (BJP)’s in-house maverick elaborated.

Biplab Deb neither provided evidence of the ‘less brainy’ part nor quoted any studies to buttress his argument. “It is said none can challenge the Bengalese when it comes to intelligence. Bengalese are known for their intelligence and it is part of their identity. But when we speak about people of Punjab, we call him a Sardar or a Punjabi.

Biplab Deb has attributed violent character to the Jats when he said that they bring out guns from their houses! Did he say this in the context of the Jat agitation in Haryana or in the context of communal riots in Muzaffarnagar, Shamli and other places?

The courts trying cases of violence in Haryana and Uttar Pradesh should call Biplab Deb as a witness and seek more information to arrive at justice. Jats’ tallest leaders Ajit Singh and Jayant Chowdhary have not reacted on ‘jats bring out guns’ issue. BJP’s Jat leaders Sanjeev Balyan and Sangeet Som along with Sanghi puppet Dushyant Chautala seem to be hiding in their holes.

No ‘Punjab da Puttar’ has challenged Biplab Deb on his theory of ‘Punjabis are less brainy!’ The season is not so rainy that the Punjabi politicians are busy enjoying munching corn in their palatial farm houses. Where is Navjot Singh Siddhu – whose ‘autorickshaw meter type mouth’ has gone terribly silent? Where is BJP’s ‘motor mouth’ Tejinder Singh Bagga? Does he agree with his party colleague Biplab Deb’s views? Is he planning to bring out new T-Shirts applauding Biplab Deb?

Since April 2018, Biplab Kumar Deb had made a series of such foot in the mouth statements after he rode to power by ending the 25-year-rule of the CPI-M-led Left front government. He had called beauty contests a farce. He added that Indians no longer win such pageants because the “international marketing mafia” had already captured the Indian market.

The misogynist Biplab had said that he did not think that Miss World 1997, Diana Hayden, was worthy of the beauty pageant! “Any Indian contestant seemed to be able to take part in the Miss World contest and win the crown, even Diana Hayden got it. I am not criticising her but did not find traits of Indian beauty in her,” Biplab observed.

In another hallucination type of statement, Biplab Deb had claimed that internet and satellite communications existed in the Mahabharata times. “Internet and satellite communication had existed in the days of Mahabharata. Sanjaya- the charioteer of king Dhritarashtra using the technology gave a detailed account and description to the blind king about the battle of Kurukshetra.”

At a Buddha Purnima event, Biplab Deb had said that Buddha walked across India to reach Japan, Tibet and Myanmar to spread his message of peace and harmony.

“Gautam Buddha had traveled across India, Bangladesh, Japan, and Tibet on foot to spread his message of peace,” Deb claimed as if he had accompanied Buddha on the trip! Historians point that Buddha never traveled to Japan. However, later, Tripura chief minister’s secretariat claimed that his statement was misinterpreted.

As usual, neither the BJP nor the Prime Minister Narendra Modi will initiate any action but will not ‘forgive’ Biplab Deb for his ‘Punjabis, Jats are less brainy’ theory!