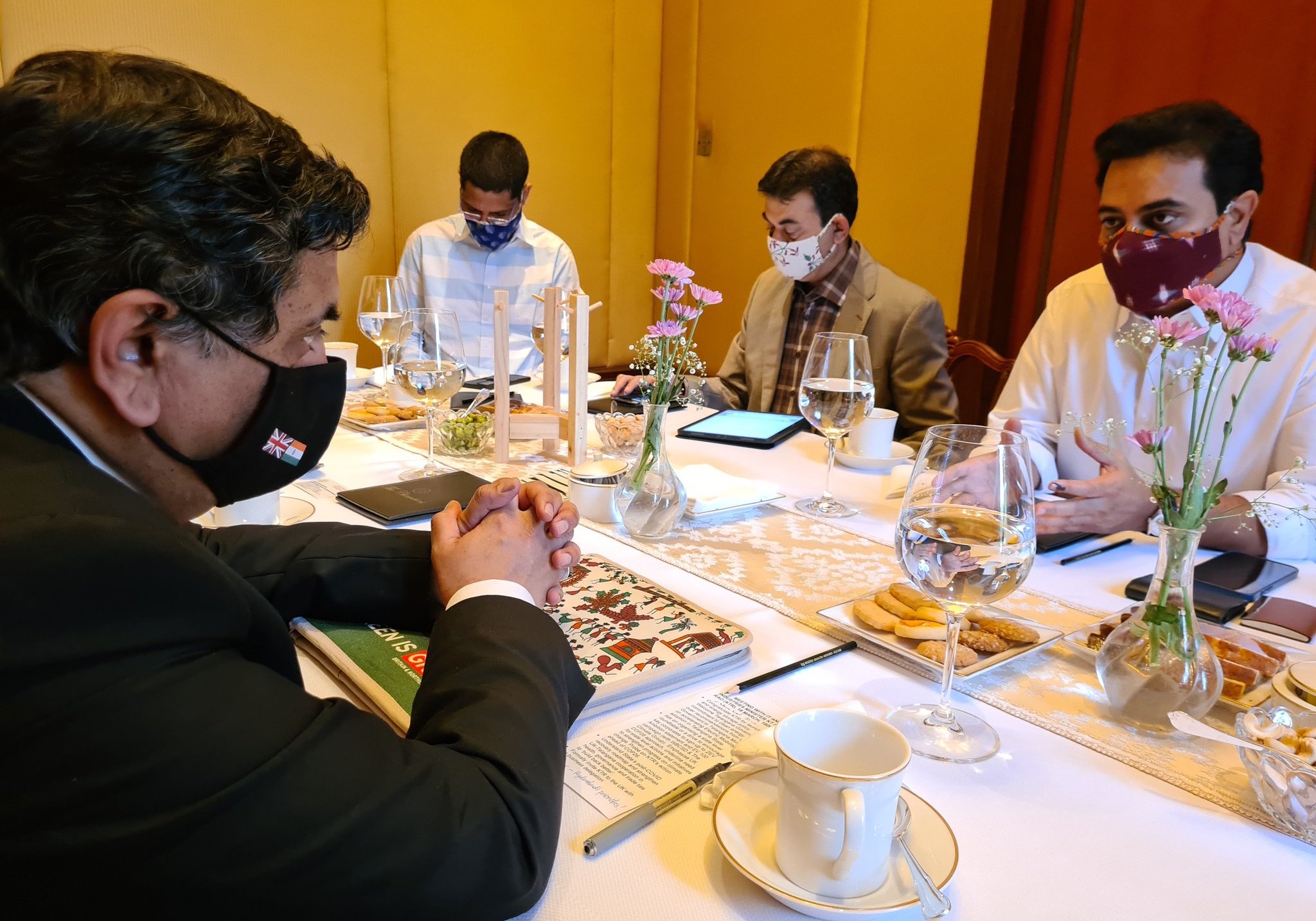 The Indo – British ties are a matter of diplomatic pride for both the democratic nations. These relations are marked by cooperation and friendship at an unprecedented level. The British Prime Minister Boris Johnson and Indian Prime Minister Narendra Modi are expected to scale new heights of cooperation and understanding as India looks forward to the British premier’s visit to India next month. The United Kingdom (UK) and Hyderabad share unique bonds of friendship which stood the test of time during the past 300 years. Prince Barkat Ali Siddiqui Khan Bahadur, the present titular Nizam of Hyderabad, and Queen Elizabeth’s warm family relations reflect on the British – Hyderabad relations. The traditional relations have done a world of good and the visit of Lord Tariq Ahmad of Wimbledon, Minister of State for Foreign Commonwealth to Hyderabad this week has put the UK – Hyderabad relations on a high pedestal.

The United Kingdom accords a distinguished priority to Hyderabad as the British Deputy High Commissioner to Telangana and Andhra Pradesh’s office is located in Hyderabad. The Deputy High Commissioner Dr. Andrew Fleming is a widely traveled wise diplomat who has taken to Hyderabad like a fish takes to water. He was instrumental in ably organizing Lord Tariq Ahmed and the UK High Commissioner to India Alex Ellis’ short but fruitful visit to Hyderabad. Both the honorable guests were awe-struck by Brand Hyderabad. Alex was fascinated by the old and the new Hyderabad along with the famed Osmania biscuit, which he had at the historic Charminar. His Exalted Highness the Nizam VII Nawab Mir Osman Ali Siddiqui Khan Bahadur used to have Osmania biscuit along with his evening tea at 4 pm sharp daily. His loyal subjects lapped on to the favorite biscuit of their generous ruler and they have never looked back.

Not only an excellent meeting between Lord Tariq and KTR but an excellent rapport and some clear outcomes on which UK in Hyderabad and Minister KTR will work. He termed the signing of a Memorandum of Understanding (MoU) between the University of Bolton and WEHyderabadHub – two dynamic institutions as a ‘bonus.’ The Bolton University described in a tweet, the signing of the MoU: This will enable a knowledge bridge between the UK and India to encourage and support women entrepreneurs.

Lord Tariq Ahmad gave many valuable suggestions during a meeting with Dr. Jugnu Jain, Co-Founder, and CEO of Sapien Biosciences – Asia’s largest BioBank. It was decided to collaborate and partner with the UK to create Artificial Intelligence (AI) systems to fight breast cancer.

At the Telangana Minorities Residential Educational Institutions Society (TMREIS) Headquarters, Lord Tariq Ahmad was presented a guard of honour. A. K Khan, Advisor to Telangana State Government, who is guiding the destingy of TMREIS, briefed the visiting dignitary and others about the quality of education and hostel facilities extended to students.

Lord Tariq Ahmad hoped that: With India and the UK looking to bolster engagement over different sectors, Hyderabad is likely to play a major role. People enjoy history and culture and you have got the best of the two, he observed about Hyderabad. The strong UK – India relationship was wholly evident throughout my visit to India this week, during which I felt very welcomed. I know Boris Johnson (British PM) will receive a warm welcome next month too, he tweeted.

Welcoming Lord Tariq Ahmad’s visit, Hyderabad’s noted historian and senior heritage enthusiast Dr.Mohammed Safiullah sounded positive thus: ‘This is good news for Hyderabad. It will increase the prestige of Hyderabad all across the world and good for Brand Hyderabad. Pharmaceuticals and computer software exports from Hyderabad have touched $ US 75 billion. These achievements make us all Hyderabadis proud. Hyderabad –British relationship goes back to the mid-1700s to start with. It got consolidated with visits of officials and dignitaries to the Hyderabad State.’

It is significant to note that Indian blood runs through the veins of Lord Tariq Ahmad. His father was from the pre-partition Gurdaspur and mother was from Rajasthan. They met in Scotland. They were blessed by the Lord Almighty with Lord Tariq who is consolidating the Indo – British relations like never before. The Glorious Nizams of Hyderabad played warm hosts to many British members of the royal family. The most significant was that in 1906 His Exalted Highness the Nizam VI Nawab Mir Mahbub Ali Siddiqui Khan Bahadur hosted the Royal Highnesses Prince and Princess of Wales. Musavvir Jung Raja Deen Dayal, the Asaf Jahi Kingdom’s official photographer captured moving images in his camera, which showed the warmth and harmony between the Nizams and the British. In the black and white photo seen here from the Chow Mohalla Palace is the Prince of Wales along with the Nizam VI (in long side locks) and just walking behind him is the heir apparent and later the Nizam VII – His Exalted Highness Nawab Mir Osman Ali Siddiqui Khan Bahadur (in the feathered cap). The official banquet had to be canceled as Nizam VI’s daughter Princess Nizamunissa had passed away and the Nizam Royal family was mourning her loss.

My friend Dr. Andrew Fleming is a heritage enthusiast. As the UK’s Deputy High Commissioner to Telangana and Andhra Pradesh, he travels quite often even to the rural areas. The last time Dr. Andrew Fleming visited me in Muscat, he expressed his disappointment about the security at historical heritage structures where miscreants deface the walls with graffiti. He is into the soul of Hyderabad very much. Donning a Kurta Pyjama, he showed around the Charminar and the Makka Masjid to UK’s High Commissioner to India Alex Ellis. Both the distinguished diplomats paid their respects to His Exalted Highness Nawab Mir Mahbub Ali Siddiqui Khan Bahadur in the royal cemetery enclosure at the mosque.   Let there be UK – Hyderabad cooperation to restore heritage structures like the Osmania General Hospital, Arts College building, Osmania University, Ritz Hotel, and the palaces of the Glorious Nizams. Princess Esra Jah had painstakingly restored the Falaknuma Palace and the Chow Mohalla Palace but other palaces like King Kothi are in shambles. It is better to save them now or lose them forever.

Recently, the elegant Moazzam Jahi Market was restored to its former glory due to the dedicated efforts of KTR and the hard-working IAS officer Arvind Rao. KTR and Dr. Andrew Fleming should have an exclusive meeting to chart out a way to save the heritage of Hyderabad and the Golden Telangana. An action plan can be drawn up and presented to British Prime Minister Boris Johnson and Indian Prime Minister Narendra Modi before 18th April 2021 – World Heritage Day or during the British PM’s visit to India. Both the prime ministers are lovers of culture and heritage. They will surely love to make a lasting contribution to Hyderabad – the city of pearls and the towering Charminar!