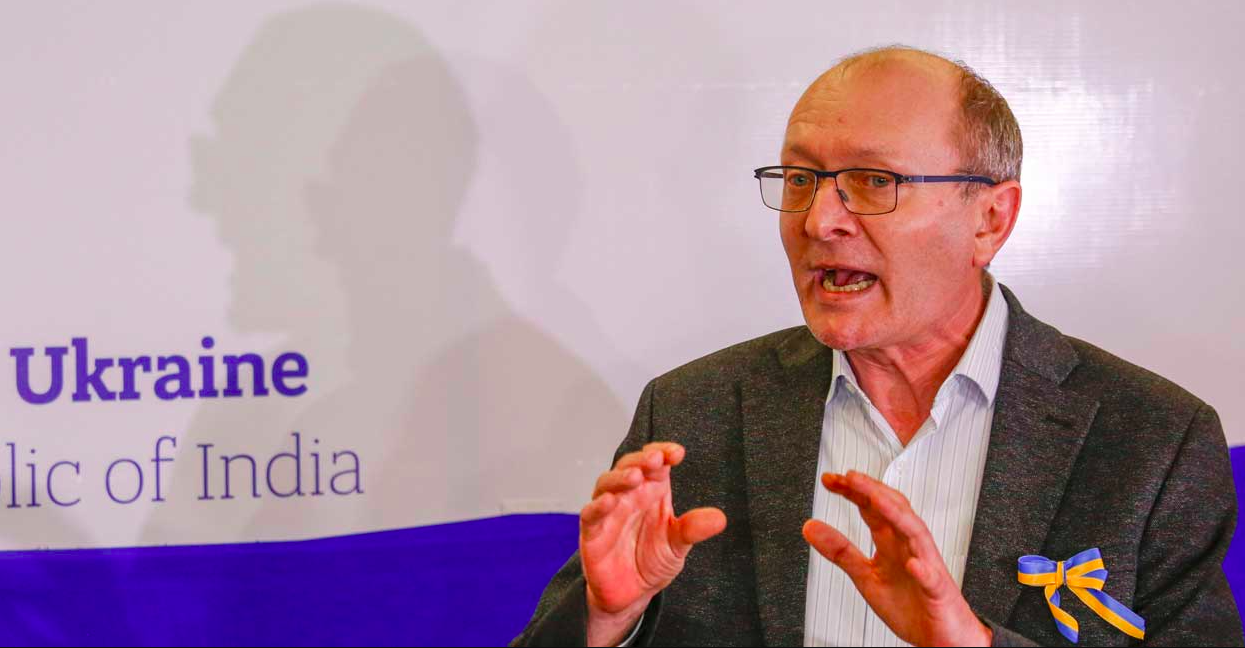 The racist and anti-Muslim Ukraine’s Ambassador to India Igor Polikha on Tuesday compared Russia’s military campaign against his country to the “massacre arranged by the Mughals against Rajputs.” The foolish ambassador’s comments were reported by the ANI. It seems the ignorant and shameless Polikha is indulging in politics instead of diplomacy and wading into communal waters. The hate personified Polikha took out his frustrations on the Indian Muslims due to the Russian bombings on Ukraine. Why are Narendra Modi and Amit Shah tutoring the racist Polikha with hateful and fake history about the Mughals’ so-called massacre against Rajputs? Does Polikha know how to spell Mughals? Polikha should not spell disaster in diplomacy when his country needs friends at this critical time in history.

Did Ukraine appoint Polikha as ambassador to New Delhi or to Nagpur? Why did the upstart ambassador make acidic and sour comments after eating Nagpur oranges? Where did he get his history lessons from? Which text is he following in history? Why did he delve into history? Why did Polikha not talk about the alleged Rajput massacre against Muslims in the present times? Why did Polikha remain silent on the Haridwar hate conclave and the Genocide call against Muslims by Hindu terrorists in saffron robes? Why did Polikha not speak a word against the lynchings? Why did Polikha not mention about the Rajput’s bulldozer-induced destruction of Muslims’ properties in Uttar Pradesh? Who gave Polikha the right to interfere and poke his dirty nose in the internal affairs of Indians selectively?

Igor Polikha is an ambassador with a begging bowl. He met the officials of the Ministry of External Affairs to beg for humanitarian aid, where he shed crocodile tears for Naveen – the Indian student killed in Ukraine. It is shameful that Ukraine could not provide a safe passage to vulnerable Indian students. To make matters worse, there have been reports of the Ukrainian police and the army beating hungry, thirsty, and tired Indian students at the Poland border and in the capital Kyiv. What does Polikha know about the grief of Naveen’s parents? Did Polikha at least try to meet Naveen’s family to offer condolences and monetary compensation? Ukraine must provide monetary compensation of at least one million dollars to Naveen’s family. All the Indian students and Indian nationals must be escorted to safety by the Ukrainian army. Ukraine must arrange a free airlift of the Indian students and the Indian nationals in coordination with the Indian authorities.

It is not the first time that Ukraine has spewed venom against Muslims. It may be recalled that Ukraine had connived with the Zionist Israel and even armed Israel against the helpless Palestinian people. Ukraine had arranged for the massacre of poor and unarmed Palestinian women and children. The massacre is in the blood of Ukraine. Ukraine’s envoy Igor Polikha would do well to remember that there is no use trying to butter Prime Minister Narendra Modi for a few crumbs of bread and some money. The world knows that Narendra Modi stands with his fascist friend President Vladimir Putin of Russia. In view of the ‘national interests’, India will never vote against any resolution in the United Nations condemning Russian aggression. Polikha should not lose his mental balance in these challenging times.

It may be recalled that the Palestinian Ambassador to India, Khalid El Sheikh was sent back after participating in a meeting at Hyderabad for allegedly ‘interfering in the internal affairs’ of India some years ago. The same yardstick must be applied and the Ukrainian Ambassador Igor Polikha must be kicked out of India for trying to ignite the Rajput versus Mughals war yet again and interfering in our internal affairs!