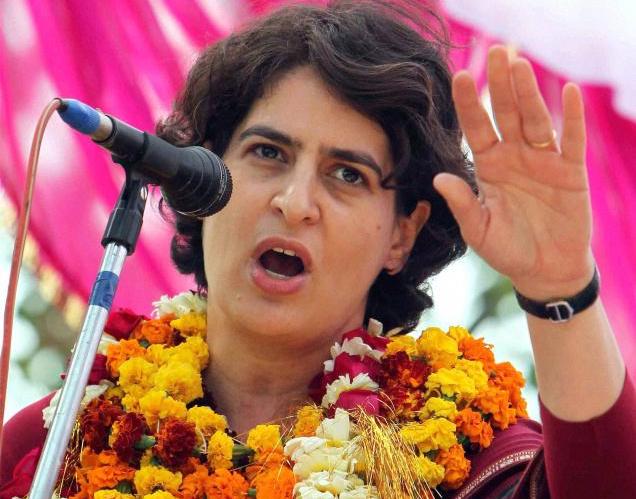 India’s Iron Lady Former Prime Minister Indira Gandhi’s Version 2.0 — Priyanka Gandhi with her tenacious grit and determination dumped Hindutva and Moditva in Himachal Pradesh’s mythological River Beas still flowing in the 21st century. According to a legend connected with the Ramayana era, there lived a sage called Shringi Rishi. It is said that the mythological Maryada Purushottam Sri Ram was born with his blessings. One day, the sage reportedly tied himself with ropes out of frustration and flung himself into the River Beas. But the said miraculous powers of the river reportedly saved him and released him of all frustration. Since this incident, the Beas has also been known as Bipasha, which means release from all bonds. Recently, Bollywood actress Bipasha Basu released herself from all bonds of her long-time ex-beau John Abraham to marry Karan Singh Grover.

The Greeks called the River Beas ‘Hyphasis’, as it became the eastern limit of the Empire of Alexander the Great when his army reportedly refused to cross it. Alexander agreed to their demand to return home and ended his 8-year expedition after raising altars to mark the limit of his vast territory on the banks of the Beas River. But Priyanka Gandhi’s army of Congressmen did not refuse her command to cross the Beas to uproot the allegedly corrupt and inefficient Bharatiya Janata Party (BJP) government led by the outgoing chief minister Jairam Thakur. The many trips of lies and deceit to Himachal Pradesh by the Hindutva and Moditva mascot Narendra Modi could not cheat the wise people of Himachal Pradesh. After the results, Narendra Modi did not accept defeat gracefully but mocked at the decision of the electorate by saying that the margin of Congress’ victory was less than one per cent. Modi does not have even one per cent humility!

Congress promised to revert to the old pension scheme. It resounded with the public as many of the Himachalis are in government jobs. The BJP government made no efforts to ameliorate the sufferings of the apple growers in the hill state. The BJP was a divided house. It had rebel candidates on 21 of the 68 seats. The BJP rebels won just two — another Independent who won was a Congress rebel. But the BJP rebels did enough damage to rout the party. Nobody was listening even Narendra Modi, who had to cut a sorry figure after he failed to persuade a BJP rebel in a phone call, to withdraw in favour of the official candidate. Himachal Pradesh, despite being the home state of BJP national president JP Nadda, saw three factions at each other’s throats. One was led by Nadda, another by Union Minister Anurag Thakur, and the third by Chief Minister Jairam Thakur. The party declared Jairam Thakur as its face in the state, but the arrogant Anurag Thakur was seen as a potential challenger. He had even shed a tear publicly in praise of the so-called ‘hard work’of his father Dhumal. The BJP workers in Himachal Pradesh, after the loss of all 5 Assembly segments in Anurag Thakur’s Lok Sabha constituency are smilingly but agitatingly calling out for ‘G*nd pe Maro Saaley Ko’ implying he should be kicked out of the Union cabinet. The hippo-faced Nadda was politically poached by Congress.

For now, the Congress has played its cards well by not succumbing to the feudalistic pressure tactics of the state Congress president Pratibha Singh, who invoked her late husband and former chief minister Virbhadra Singh. Pratibha still seems to be singing – Kisi Din Banoongi Mai Raja ki Rani… The new Congress president Mallikarjun Kharge had to remind her that she had already become Raja Virbhadhra Singh’s Rani before and now it was time for Sukhvinder Singh Sukhu – the National Students Union of India (NSUI) leader turned youth leader turned 4-time veteran legislator to become the new chief minister of Himachal Pradesh.